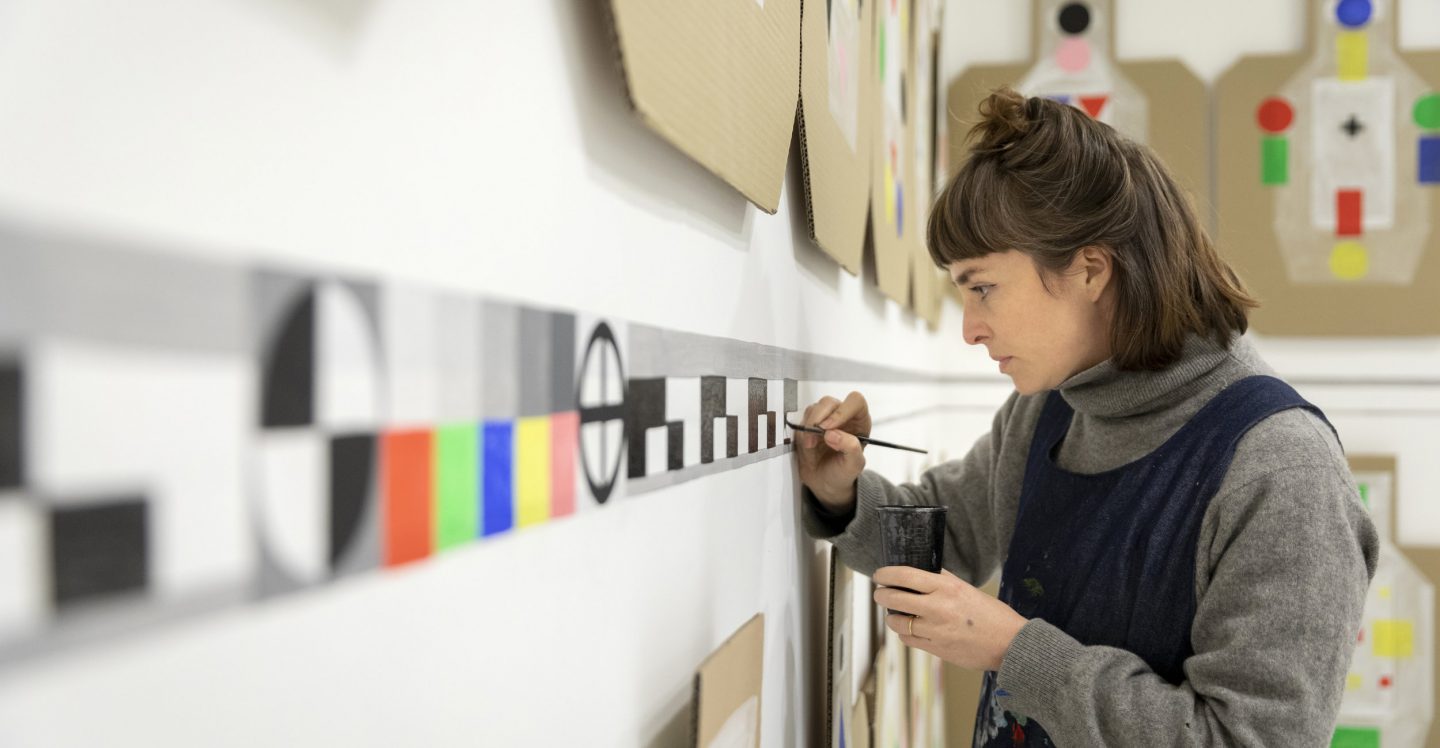 Shoot The Women First is the first solo exhibition in Belgium by Athens based artist Navine G. Khan-Dossos. With several choreographical elements of a shooting range, she focuses on issues of gendered violence and the woman’s body as a primary ground of exploitation and resistance. Through a series of works on cardboard, panel and wall painting, Navine G. Khan-Dossos reflects on the role of women regarded as both perpetrators and victims of violence. But what does it mean to be both a threat and a target? The artist elaborates this reflection against the biopolitical urge of society to standardise and control the body. The violence represented in her work is not merely physical, but embodies a wider threat by society by those who exist on the periphery of mainstream politics and culture.

The title Shoot the Women First alludes to the advice given to the members of GSG 9, a German anti-terror unit that was founded in the early 1970s. It soon became Interpol’s standard advice to other European units in the aftermath of the RAF (Rote Armee Fraktion) and other paramilitary attacks carried out by female members of terrorist groups.

These works draw on a heterogeneous range of historical, ongoing and future scenarios. For example, within the Greek context, they were shaped by the 2012 arrests of female drug-users. These women were suspected of engaging in sex work and were obliged to take HIV tests. Those who tested positive were imprisoned. The police passed on the personal information of the imprisoned women to the media, which led to even more stigmatisation and terrorisation of female sex workers and women with HIV. The uncontrolled use of weapons by US police officers against civilians is also an important reference for the artist. And there are the recent social media campaigns that call attention to the sexual harassment of women worldwide. All of these are situations where terrorism and bioterrorism mix, and where viruses and virality are used as weapons.

Choreography of a shooting range

At the exhibition, two series of paintings, Pink Discretionary Command (2018) and Grey Discretionary Command (2018), made on the traditional gesso panels used by religious icons painters, abstract the human body as a series of points to be shot at and a politicised set of symbols. Their colors and shapes reference to several pictorial and symbolic systems, such as the distinct shade of pink which demarcates the brothels of central Athens, the brightly colored shapes of ‘discretionary command’ training targets and emblems of different LGBT rights campaigns (such as the pink triangle synonymous with Act Up’s Silence = Death campaign).

Close to them, a series of gouaches on cardboard, Bulk Targets 1-100 (2018), takes its shape and number from the International Practical Shooting Confederation target model. The artist detects processes and techniques of ‘othering’, such as sexual harassment and bio-terrorism, and critically re-codify them into new symbolic systems.

Khan-Dossos’s practice often responds to a sense of place and takes the form of site-specific installations and spatial choreographies. She conceptually transforms the Z33 gallery spaces into a shooting range with the paintings placed as targets. The work Below the Belt (2018), a forensic ruler delineating the space as a crime scene, points out at the most targeted part of the human body and becomes a continuous element connecting different parts of the exhibition.

The exhibition at Z33 includes a new commission, ‘Silent Latitude’ a quilt designed with the members of the Greek Trans Support Association in Athens (GTSA) and realized in collaboration with Miriam Vanheusden and MIA-H Fashion Incubator for Accessories in Hasselt. The work began with a series of watercolour designs made in Athens with the GTSA, on the model of the Greek Cross, a common pattern in traditional quilting. The title Silent Latitude is taken from The Mengeldichten (Poems in Couplets) by Hadewijch, a 13th Century Flemish Beguine known as a mystic and poet. For the artist, the title refers to the divide between the European North and South – the two locations of production for this quilt, and how these very different environments are both places that have a history of and important ongoing place for women’s support groups and communities.