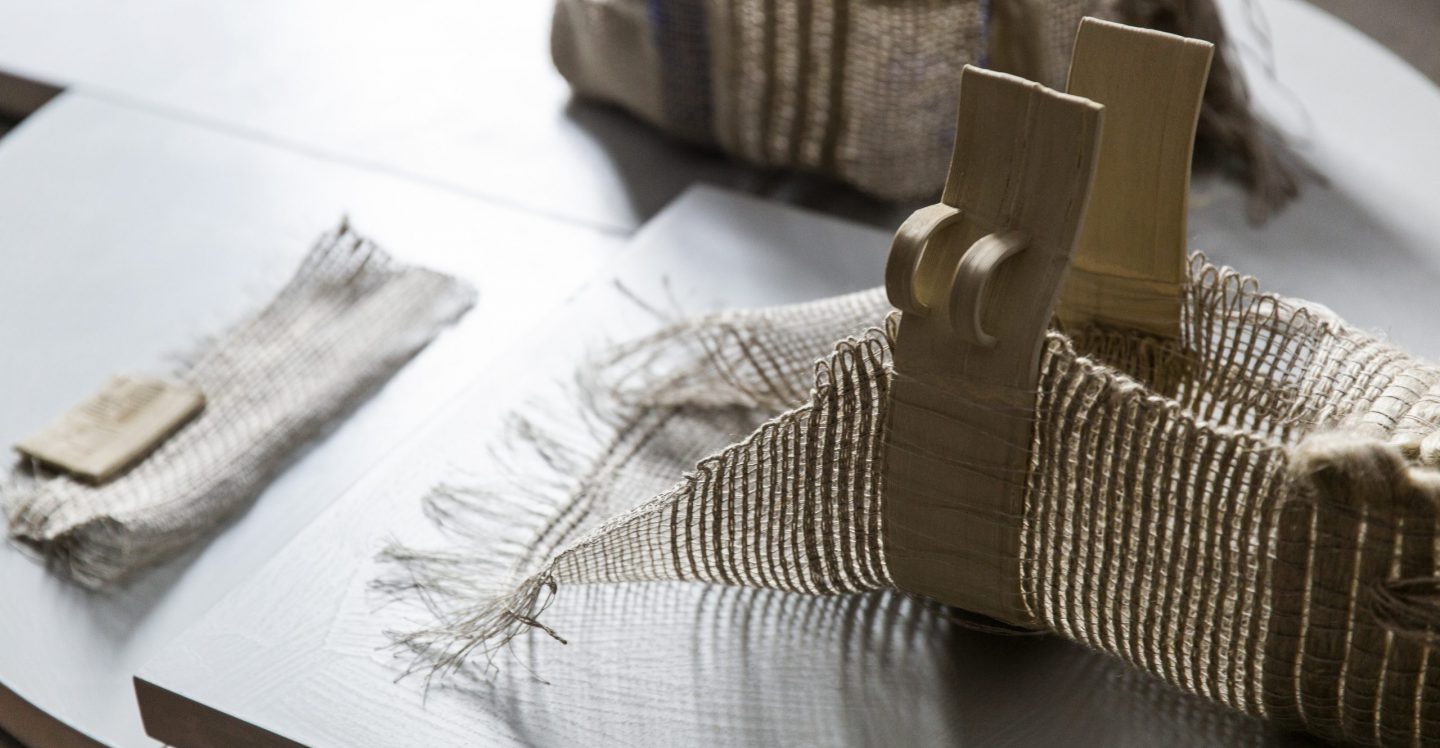 Four designers selected in recent editions of FORMAT will be presented at Collectible 2020 by Z33. Exhibitors include Lee Castro x Hyung Kyu Kim, Amandine David, Sophia Holst and Bram Vanderbeke. Their unique pieces of art were made especially for Collectible, are linked to Brussels and are presented in a new composition of Bram Vanderbeke’s FORMAT scenography.

When Lee Castro was living in Brussels, the poor quality and taste of the tap water made them come up with the idea of a water-purifying object which consciously engages people. The water purifier was created together with the Korean ceramic master Hyung Kyu Kim. It can survive for centuries and makes us aware of the daily choreography of receiving and pouring water.

‘Weaving code’ is the ongoing research project of Brussels-based Amandine David in which she explores the stories that are embedded in weave patterns from various cultures in order to connect hand-weaving to 3D printing. While a unique piece of textile is produced on the loom, an object is generated on a computer using the same binary code. It demonstrates that traditional crafts and digital tools are not opposites, but can actually enhance each other.

‘Corner stone’, a work by Sophia Holst from the series ‘Forms of Public Privacy’, is inspired by the many hidden spaces and dark niches at the back of the Palace of Justice in Brussels, and where both people and rubble gather in the shade. This non-place facilitates a public privacy for people who are excluded from our hyper-designed society. The work of Sophia is a plea for these urban leftover spaces.

FORMAT is Z33’s coaching programme for new and promising talents working in design and architecture.

LEE CASTRO is formed by South Korean painter Miyeon Lee (1980) and Belgian architect Ruben Castro (1990). Their spontaneous and continuous dialogues are not guided by words, but by embodied images: between the lines, materials, colours, building models and paintings. These interactions give way to natural fermentation of projects that speak through humour, problem solving and the joy of thinking hands.

Amandine David (1988) is a Brussels-based designer and researcher who builds bridges between digital fabrication and traditional craftsmanship such as textile weaving and pottery. She is the co-founder of Hors Pistes, a nomadic residency programme that initiates encounters between craftspeople and designers from different cultures and disciplines. Amandine graduated from the Design Academy Eindhoven in 2018.

Sophia Holst (1988) is a Brussels-based Dutch artist and architect. She obtained a Master’s degree in Visual Arts at the Sandberg Instituut in Amsterdam and a Master in Architecture at the KU Leuven in Brussels. Until 2015 she worked for the architecture firm Studio Anne Holtrop. Sophia explores the design and use of architecture and public spaces in relation to politics, social paradigms and everyday human activities.

Bram Vanderbeke (1991) is a Belgian designer based in Ghent who graduated from the Design Academy Eindhoven in 2016. His designs are autonomous artistic manifestations defined by raw materiality and monumentality. Bram is one of the founding members of BRUT, a collective of five Belgian designers. Earlier this year, he exhibited at Nilufar Gallery, one of the most important design galleries in the world.